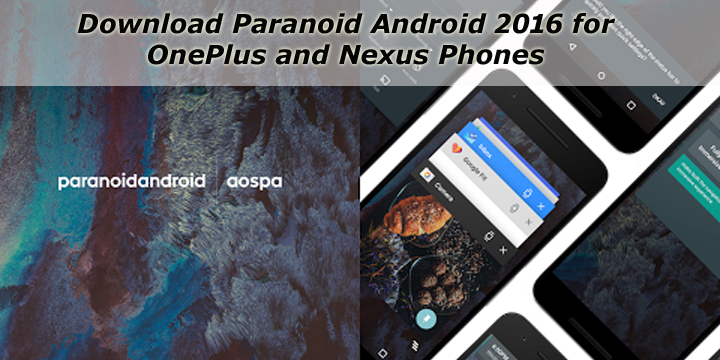 The Paranoid Android made a public announcement this morning on Google+.

We are launching brand spanking fresh. All new features. New team members. New everything and we have made sure that everything that we are releasing has been polished to our best.
The main features and enhancements that you will probably end up noticing are our custom Quick Settings tile reordering functionality, floating window support, immersive mode, the new on-the-spot interface and CM Theme Engine.

How to Install Paranoid Android 6.0 for OnePlus and Nexus Phones –

1) Download Paranoid Android 2016 ROM and Gapps file from above and save it on your device.

3) Now you will enter into Recovery mode. Now in TWRP, create a Nandroid backup (Recommended) of your device for safer side, if anything goes wrong.

4) Now do a Factory Reset by Goto Wipe>Advanced Wipe>Select Wipe cache, Dalvik cache, System, and data and swipe to confirm it.

5) Now, Go to Install and locate the ROM zip file & swipe to Install the ROM file. After the process completes, Flash the GApps zip file.

So this the complete guide to Download and Install Paranoid Android 6.0 for OnePlus and Nexus Phones. Let us know if you have any questions via comments below.