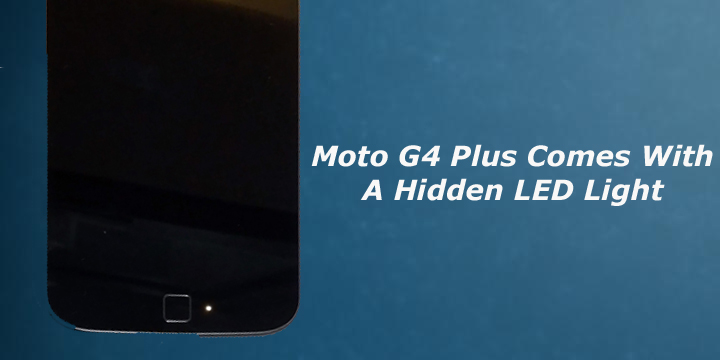 Moto G4 Plus is not the first phone to feature a hidden LED light. The Motorola Nexus 6 and the 3rd-generation Moto G had one as well. However, those LED light on that devices could be enabled through some apps (Moto LED or LED Control) and hacks. We hope positively that one day developers will find a true and meaningful purpose of this hidden LED light. However, Moto G4 Plus doesn’t need this as the device comes with a Moto Display, which works fantastic and lights up the entire screen. Check out the below YouTube Video from Maurson Technology which demonstrates the Hidden LED Light on Moto G4 Plus.

As for specifications, the Moto G4 Plus sports a 5.5-inch FHD IPS display with 1080p resolution and a pixel density of 401PPI. Moto G4 Plus is powered by a Qualcomm Snapdragon 617 processor coupled with Adreno 405 GPU and 2/3GB RAM. The phone packs with a 16/32GB of internal storage that can be expanded up to 128GB via a microSD card. The phone comes with 16 MP rear camera with dual LED flash and 5 MP front camera and has 3000 mAh battery. The Moto G4 Plus runs on a latest Android 6.1 Marshmallow.