The update is rolling out via OTA (Over the Air) for users who will join the Nougat beta program and comes with the latest EMUI 5.0. Android Nougat update for Huawei Honor 8 will conducts in two phase. The first batch with 50 users, while the second batch with 100 users. The update will be available for Honor 8 (FRD-L02) for India Market. Company will also roll out a beta test program in the U.S, U.K, India and France during November to collect feedback. 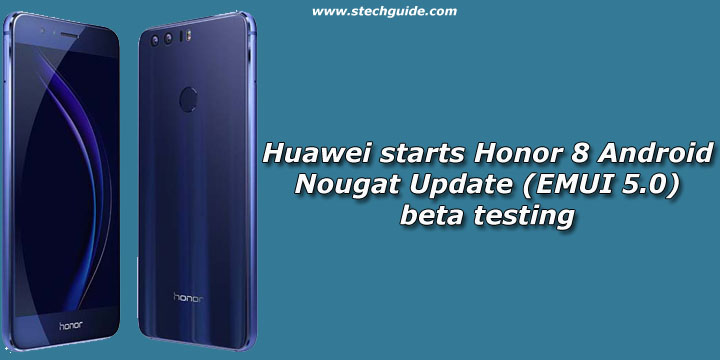 The Nougat BETA Test program offers Honor 8 users to experience the latest version and help identify bugs in the EMUI Software. Huawei also colloborate with Android Central and XDA to join the Honor 8 Android Nougat update beta testing program. XDA users has 55 slots for FRD-L04 version of the Honor 8, and another 10 slots for FRD-L02 model, while Android central has 25 slot for US users. Check the Huawei Honor 8 Android Nougat Update program feature and form from below.

Apply for Android Nougat for Honor 8

Unfortunately, the beta is limited to the few users who fill the Nougat beta program form. Honor 8 Android Nougat Update manual file and for all users will be available soon, until then join the the beta program and enjoy Nougat on honor 8. Let us know how’s your experience with Honor 8 Android 7.0 Nougat Beta update by comments below.