Official bootloader unlock for the European LG G5 (H850) is now available from LG’s Developer site. G5 is the latest flagship device by LG, which comes with powerful specifications and detachable modules. Until now there was no method to unlock bootloader of LG G5, but recently LG released it for the European variant (H850). With some simple steps you can easily unlock Bootloader of LG G5 and flash TWRP on your device. Even though the process is officially supported by LG, but the unlock operation isn’t official like HTC, which means that the warranty of your LG G5 will void. Before you unlock bootloader of LG G5 make sure you are on European variant H850, it will not work on any other variants. 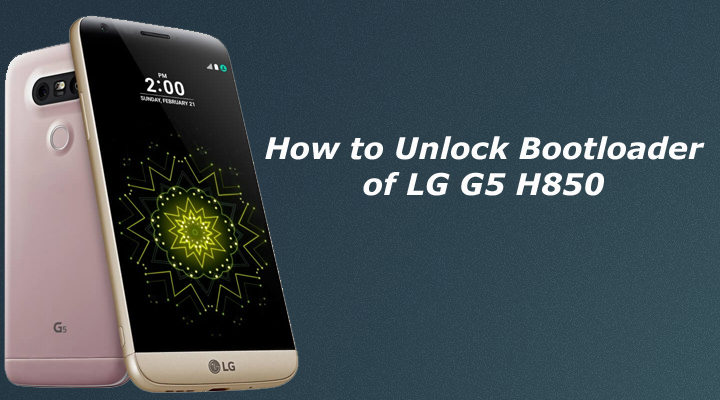 How to Unlock Bootloader of LG G5 –

2) To unlock bootloader of LG G5, you need two things, device ID and your phone’s IMEI number. To get the IMEI, you can simply type *#06# in the dialer and note it down.

4) Now go to installation directory open ADB folder and open the command window thereby pressing and hold the ‘shift’ key and right-clicked anywhere in that folder.

5) Now connect your phone to PC and reboot the device into fastboot mode by typing below.

7) The above command will return a character string. This is the Device ID of your device, which is needed to generate your unique unlock key.

8) Now to generate your unlock key, you need to paste together the 2 lines of output into one continuous string without “(bootloader)” or white spaces.

Example, the Device ID would be:

10) Now on the page that opens, enter your details include your name, email ID, IMEI and device ID.

12) Now you get Unlock key on your mail, download the file and save it on fastboot installation directory.

13) Now while the device is still in fastboot mode and is connected to your PC, enter the below command in command prompt:

14) Now to reboot your device type

The above steps will unlock Bootloader of LG G5, to root and install TWRP Recovery on LG G5 follow this guide. Let us know if you have any doubts.