How to unlock bootloader of Moto G4 Plus –

5) Now connect your device to PC and enter into the fastboot mode. To enter in fastboot mode of Moto G4 Plus, type the below command in command prompt.

6) In the command window, type the following command.

7) the above command will return a string. Now copy the code in notepad and delete all the blank space so that  you will  get a single line string.

8) Now head over to the Motorola’s unlock the boot loader site and create a free account or Sign in Google+.

9) Now Paste the above String (Unlock Code) in the bottom of the Moto site (step 6) and click on Can my device be unlocked? You also need to accept terms and condition on this page by clicking I Accept.

10) The unlock key will be sent to your E-Mail ID, which you used to register at Motorola site.

11) Now copy the Unlock Key and execute the following command. 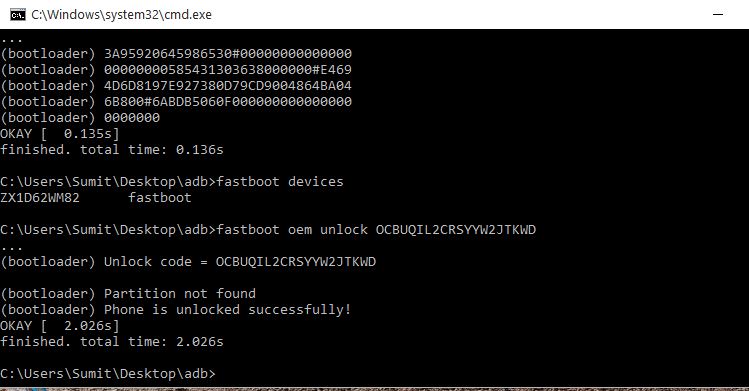 12) The above command will Unlock Bootloader of Moto G4 Plus.

This is the complete step by step guide on how to unlock bootloader of Moto G4 Plus. Now you can also Root and TWRP Recovery on Moto G4 Plus. If you have any questions comment below.